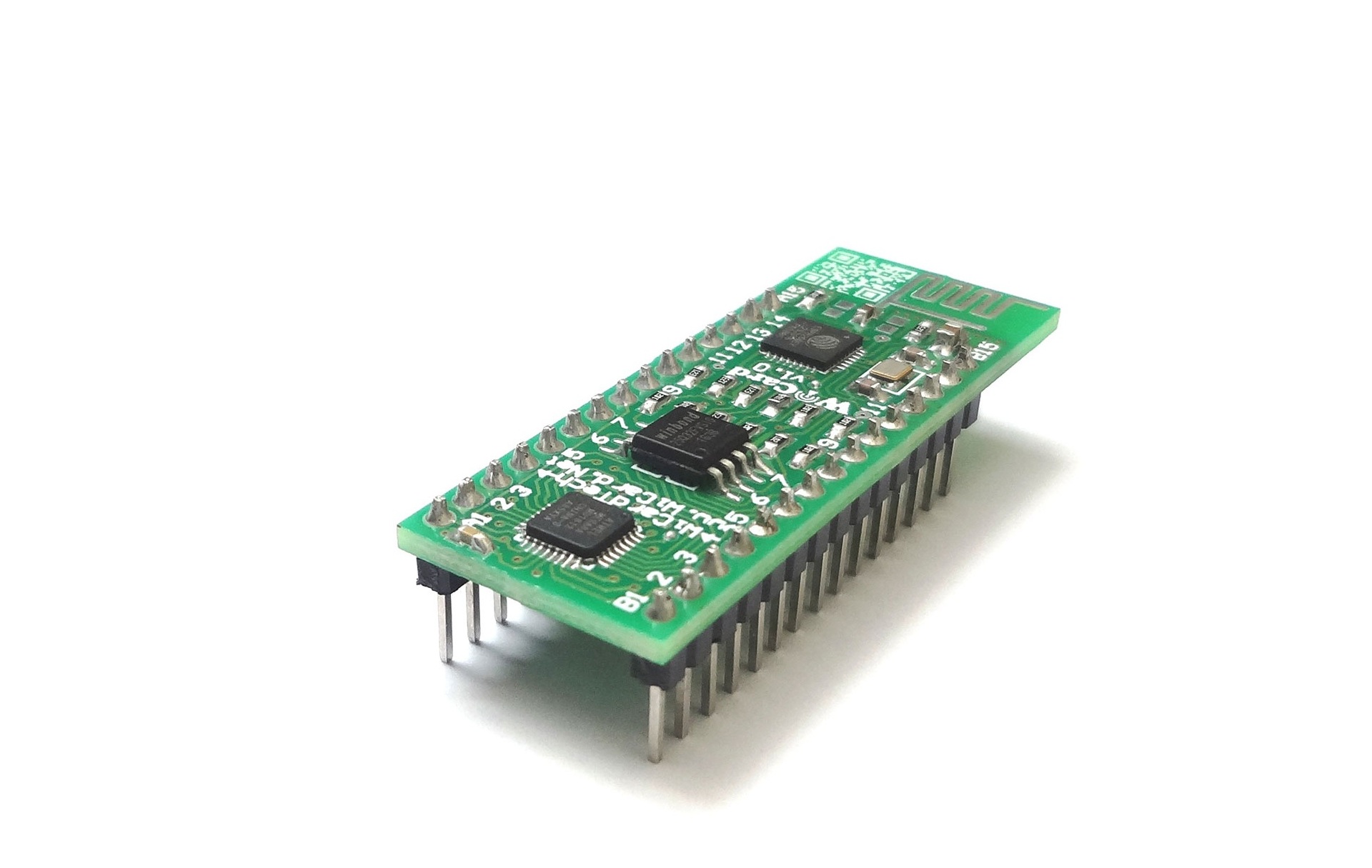 WiCard is a programmable WiFi module which connects to the user control panel or application via Wi-Fi. So It allows users to have access to its features over the air and wirelessly. WiCardTech group has designed the module as to not need a JTAG programmer after initial programming. Instead, WiCard modules can be programmed offline with the module’s hot spot, or online with a WiCard.Net account. The Integrated Development Environment (IDE) for this module resembles Visual Basic, which the programmers are most comfortable with, and the GUI and code generation can be accessed at the WiCard Simulator.

In the simulator, you can make a control box for the module, and have access to the module control box from the module hot spot (via the module’s Wi-Fi access point), the module IP (via port forwarding), and also the WiCard.Net account panel.

We created the module in such a way that it updates via WiCard.Net servers automatically. 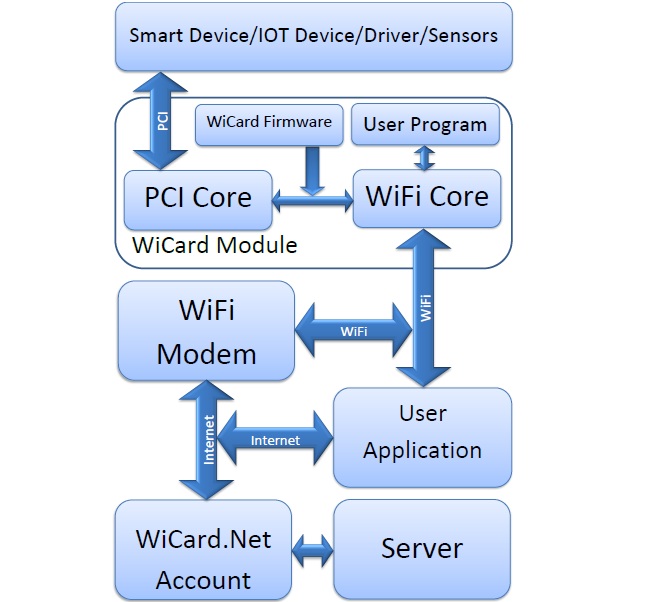 In addition, the Xtensa core uses an external 26 MHz crystal and the AVR core has an internally configured oscillator.

The WiCard module has 30 pins, including two 3.3 V VCCs, 2 GNDs, 22 GPIOs, 3 status LEDs, and one reserved pin for future features. Also the pins are in two 15-pin sides. So you can put this module at the center of a breadboard and use it for your different experiments.

The module has a 50Ω antenna located at the bottom of the PCB.

The figure below provides an overview of the pin configuration for the WiCard module. 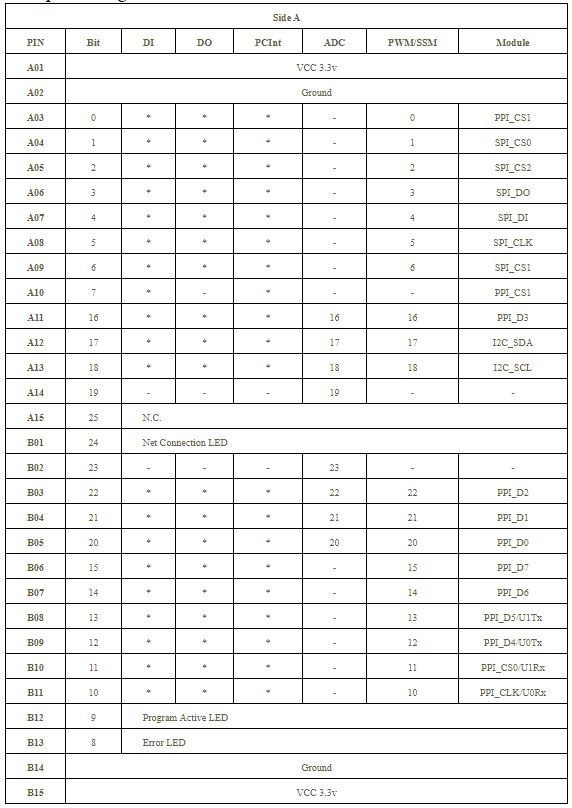 Our goal when designing the WiCard module was for it to be as straightforward as possible. In the end, we made it so the ESP8266EX connects to the W25Q32 and ATMega8A, and the ATMega8A microcontroller connects to the pin headers. 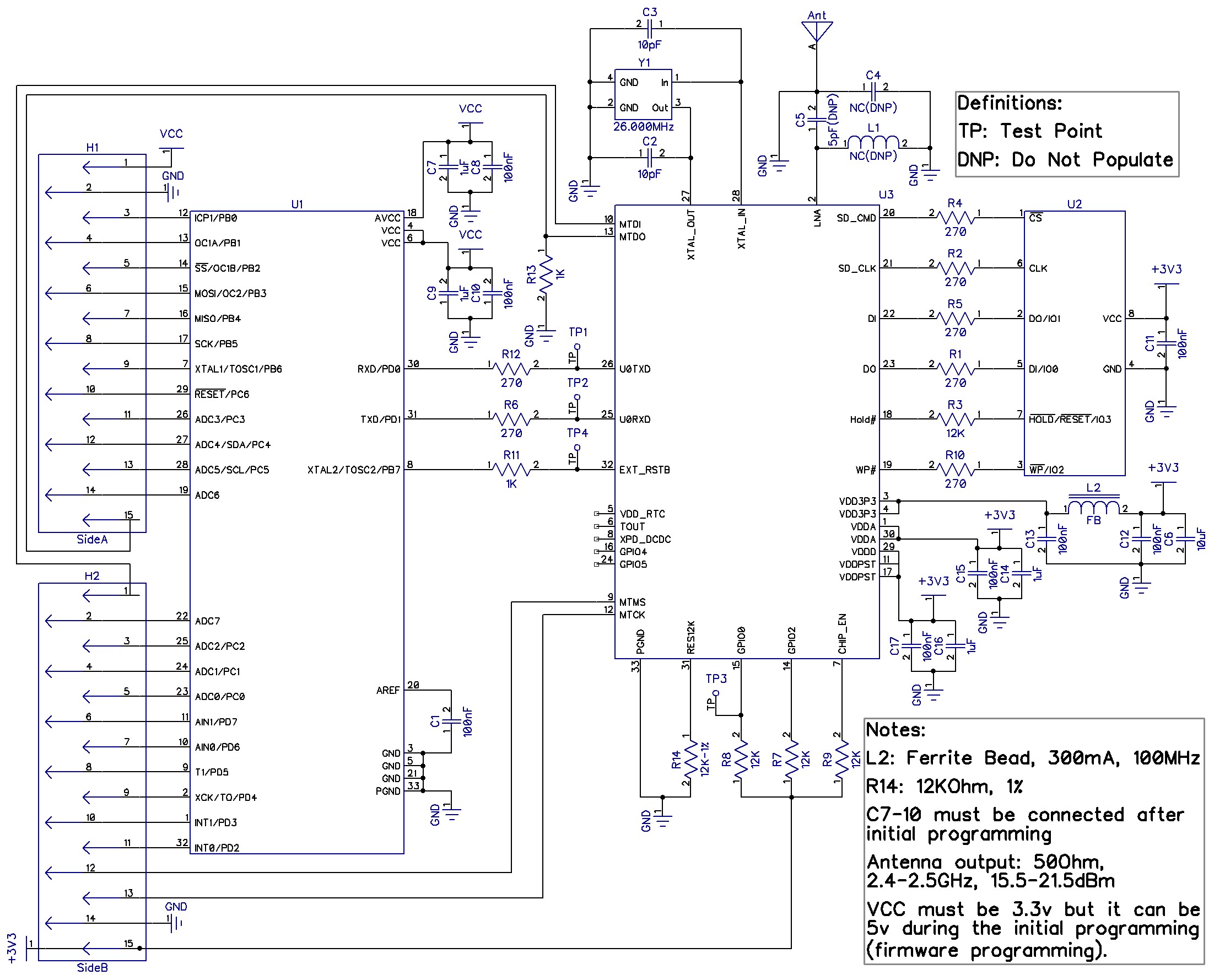 The resistor and capacitor values used in the schematic have been tested. So we recommend these values. However, you can make changes to component values and footprints for your custom PCB layout. (For example to simplify the production process.)

C5 and L1 form a matching network for the antenna and will vary from layout to layout. Based on the chip’s stated impedance of (39+6j)Ω, a capacitive value of C5=0.7 pF and an inductive value of L1=1 nH provide a theoretical VSWR of 1:1 (0% reflected loss). A single 5-10pF series capacitor (inductor omitted entirely), provides a VSWR of 1.34:1 (~2% reflected loss). For the purpose of the initial experimentation, we made sure that the single capacitor sufficiently matched the impedance between the antenna and the chip which allowed 98% of the power from the chip to be transferred to the antenna.

In our production environment, C5 and L1 were determined experimentally with a network analyzer and applied to all identical boards.

The onboard antenna is a Meandered Inverted-F Antenna (MIFA). We chose this antenna because it has been designed for 2.4 GHz signals with 150-250 MHz bandwidth range on 20-60 mils (0.5-1.6 mm) thick, two-sided PCBs. The working distance of the onboard antenna of this module, is about 170 ft (50 m) in a closed area.

After assembling the parts on the PCB, program the initial firmware onto both of the cores. So making sure to program the ESP8266EX before the ATMega8A.

Follow the standard steps of programming the ESP8266EX, which is with a USB-to-UART converter and the ESP Flash Download Tool, and used the following connections:

There are two approaches for programming the firmware on the module: the “WiCard specific programmer” created or a standard USB-to-UART programmer, such as the FT232RL FTDI USB to TTL Serial Adapter. 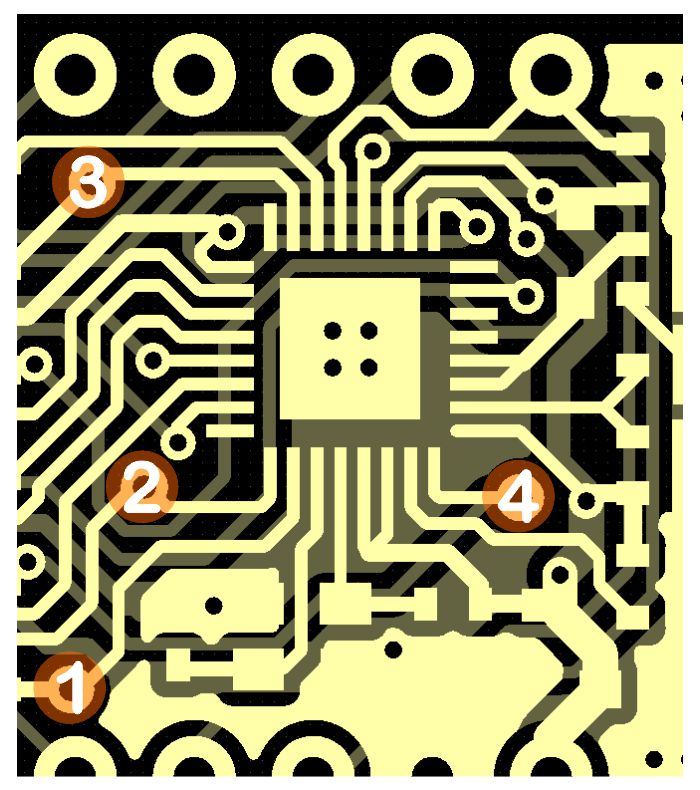 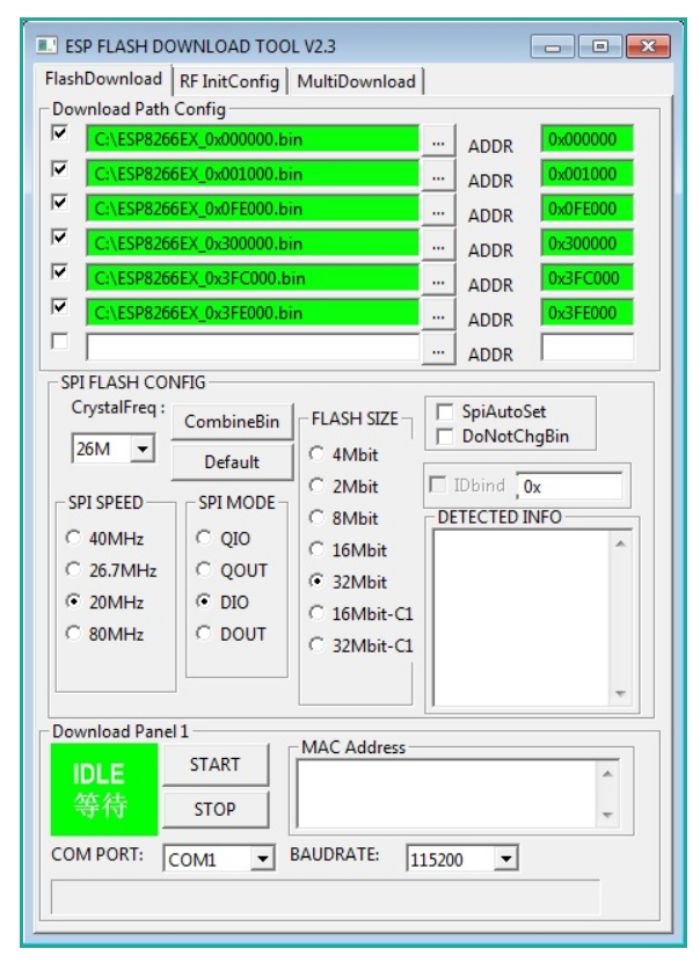 You can download all of the necessary files and the latest revision of the firmware from Trial.WiCard.Net .

The firmware for ESP8266EX includes 6 files:

To programing the ATMega8A, use either an SPI programmer or a high voltage programmer (parallel programming mode). So for SPI mode, set the pins according to the following table:

Programming the module in high-voltage mode

Do not connect the other pins. Also C7, C8, C9, C10 somehow interfere with the high voltage programmer and need to be installed after the initial flash programming process.

We designed the WiCard in such a way that programming the ATMega8A in the high voltage mode allows both the registration of new modules on the WiCard.Net servers and server access. Or, if users decide to go the route of SPI programming mode, We’ve made it so upgrading modules over the air and using all of the trial features is possible, except anything regarding pin A10, such as PCInt 7.

It was important to us to make sure the WiCard module was suitable for industrial wireless control, IoT devices, home appliances, home automation, security systems, smart outlets and lights, infrared remote controllers, and sensor networks. This enables users to make products controllable by adding this module to existing circuits, thereby controlling a variety of devices via a computer or smartphone.

Programming and using this module requires only a stable 3.3 V power supply and a Wi-Fi compatible laptop, PC, or phone. The WiCard IDE software is still a work in progress. For now, if you’re interested in giving the module a try, you can use the simulator page as the module compiler.

On that simulator page, there’s a compiler, a control box maker with some visual tools, and a WiCard simulator. A graphical user interface allows for programming without learning the underlying language, simply drag the items into the control box and edit the pin by double-clicking on the item.

Here are the programming options:

After uploading the program, the module will execute and run the program automatically, and the control box is available in both the WiCard.Net account panel and the module’s internal page. Registering the module and creating an account on the WiCard.Net server is not necessary for using and programming the module. The account simply provides server access and some extra features. The free version of the module will not connect to the server unless the user clicks on the “firmware update button” in the module internal page, which causes it to check for the latest free software revision to update. If you decide to connect to the server, the default password is “0123456789” .

The compiler will automatically generate the source code. The video below shows the WiCard in action.

The download link of the latest revision of the Free Trial Firmware and latest plans: https://wicard.net/_trial/WiCard%20Free%20Trial.zip