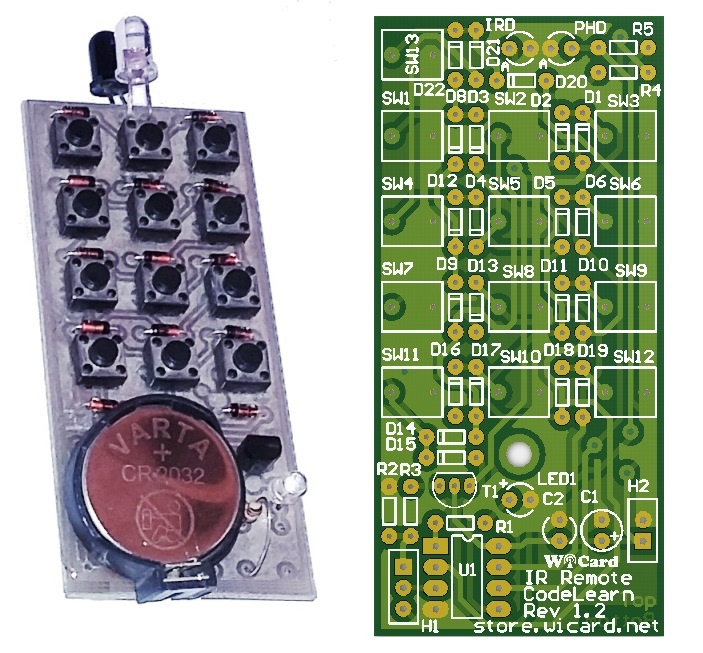 This project is a “Programmable and Code Learn IR Remote (InfraRed) With ATTiny13A”. ATTiny13A is a low-cost AVR microcontroller with 8 pins (6 I/O) and 1KB memory.
There are two folders in this project, “PCB-SCH-BOM” and CodeVision Source.
Also In the source code folder there is a pre-compiled file in the “HEX” folder. To re-compile or check out the source code, open “IRRemote.prj” with codeVision AVR software.

The microcontroller uses its internal 9.6MHz oscillator. Also the BOD is enable to check the voltage if it is not under 2v. A 3V CR2032 battery can be supply the power for 6 months.

In the “PCB-SCH-BOM” folder, there are 6 files:

The PCB file has been drawn by “Altium”, also there is a “PDF” and “DipTrace” file of the schematic and PCB in the project files.

IR Remote has 13 push buttons which each of these buttons can be programmed manually or can copy a code from another supported IR Remote into the channel’s memory.

The IR Remote Board

The PCB dimension is 35*75mm with two layers (metalize PCB). There is a 3mm pad in the middle bottom of the PCB and also you can re-locate it according to your enclosure.

H2 is for the power source input (3-5V) and H1 is a 3 pin header. It’s necessary to use a jumper for the H1 pin header. With placing a jumper on pad1 (square pad) and pad2 of H1, the device will turn on in normal “Infrared remote” mode. After placing the Battery, The LED1 will blink for 0.5 second and turns off. With placing the jumper on pad3 and pad2, the device will turn on in “Code Learn” mode. After plugging the power, LED1 turns on and remains on.

By holding “SW12” during the power on (for at least 1 second), the device will turn on in manual programming mode (in case the jumper is on pad1 and pad2) and LED1 will remain on.

First of all place the jumper on pad1 and pad2 and turn on the remote in “manual programming mode” by holding “SW12” during the power on (for at least 1 second). LED1 will remain on.

Every time you push a button, LED1 would be toggled. When you insert the fifth digit, the LED1 will blink multiple times which means the code has been saved.

Turn on the remote in code learn mode (put the jumper on pad2 and pad3 before power on). Choose a channel and LED1 will turn off. Hold a supported IR remote control in front of the photo diode. Push a button. If LED1 blinks multiple times, that means the channel received the button’s code and has been programmed.

Link of this project in our online store: IR Remote Control (infrared) Programmable and With Code Learn