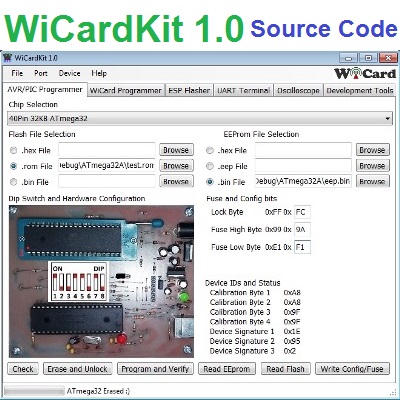 The high voltage (parallel) programming method which has been used in WiCardKit Software programmer is the highest layer of access to the microcontroller memories and programming. This method can unlock the AVR/PIC chips which can’t be programmed by regular programmers while the chips work well.

The other feature is the “reset” pin in some the microcontrollers can be accessible as an IO with high voltage programming.

This voltage can only be applied on the “reset” pin under the specific condition.

This software contains tools for the programmable based circuit designs. such as the circuit with microcontrollers or arduino and etc.

In the current revision, in addition to the AVR parallel programmer, there is a USBtoSerial interface which lets the user to upload the programs on espressif modules.

The following AVR microcontrollers can be programmed with the high voltage method:

In the “WiCard Kit 1.0 WinDriver” folder there is a driver installation file. After plugging the USB cable of the WiCardKit board, install the driver.

In case the driver has been installed probably, you can see the device’s COM port in the device manager window.

The software will be installed automatically and a shortcut icon will be added on your desktop. also It will run automatically right after setup and will ask you to select “COM” port.

After plugging the WiCardKit 1.0 board USB cable, select the COM port of the board.

In case everything is ok, “WiCardKit 1.0 Found” will appear in the bottom of the window.

For the chip programming, first select your chip from “chip selection” drop down menu.

Also The “Dip Switch” configuration of the board will appear and configure the switches.

You can choose and select one of the .hex, .rom and .bin forma files for the flash and .hex, .eep, .bin for the eeprom memory programming.

Also In the “Fuse and Config Bits” section you can see and set the lock and fuse bits value.

“Erase and Unlock” erases the flash memory (and eeprom if eesave is not programmed). and then set the fuse bits to default, so the chip can be program with regular serial programmer.

“Program and Verify” erases the flash memory and then programs the selected files into the chip. and finally will program the fuse bits if have been set.

“Read EEprom” reads the eeprom memory and saves it as a .bin file.

“Read Flash” reads the flash memory and saves it as a .bin file

More projects in our Blog.